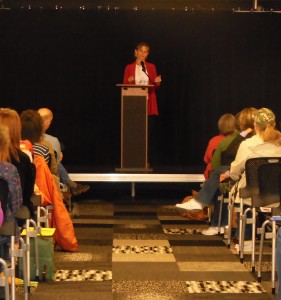 This past Saturday I attended the Pikes Peak Library District’s (PPLD’s) annual Mountain of Authors (MOAs) event, in Colorado Springs, Colorado. This was my second year in attendance, and I continued to have a blast meeting and talking with others interested in books! It was held at the north end’s Library 21C.

There were two panels and one Keynote Speaker—who was Anne Hillerman, Tony Hillerman’s daughter and an author in her own right. People were allowed to mingle with the authors throughout the day’s events. We had full tables to ourselves, as authors, and I got to share the neighborhood with Kevin Ikenberry, who I’d met and been on panels with at last year’s MileHiCon. Good to see you again, Kevin!

This was the first panel, moderated by K. D. Huxman, and its panelists were Nancy Atherton, Robert Greer, and Manuel Ramos. All manner of questions were asked of our panelists, about writing, being a writer, being a mystery writer. A couple of responses from the panelists grabbed me, so I wrote them down:

“I’m surprised at the sheer volume of writing out there.” Robert Greer. Mr. Greer also went on to say how he misses the old days, when editors really edited material and there was better quality being published. I have to agree with him!

“I still think being a writer is a big deal.” Manuel Ramos.

“Read as broadly as you can.” Nancy Atherton. I do agree!

“It’s more important to read than to write.” Robert Greer. I don’t know that I agree with him, here, but the point is well-made!

“You never become really good at anything unless you do it over and over and over.” Robert Greer. I’d been in conversation at my table with a person who was having difficulty finishing a book he’d been working on, and that was one of the things I’d told him: persistence.

“Write the book you need to write…don’t set out to ‘write a genre.'” Nancy Atherton. She was talking about don’t worry what genre your book is, just write it…don’t worry about it…and let the book be what it will be. I liked that.

The next panel was in celebration of the 10th anniversary of MOA. This panel was moderated by Shannon Miller and consisted of Mario Acevedo, Sandra Bond, and Kristen Heitzmann. I thought it was also cool that it also marked Mario Acevedo’s 10th year of being published, with his Felix Gomez vampire series. Congratulations, Mario!

While there was a lot said during this panel, I didn’t seem to write down much, perhaps because I was too drawn into the conversations and humor (Mario used to be an Army pilot and had sign in his chopper’s cockpit with an arrow pointing up)! I kept trying to write quotes down—when another one was ripped off, and I’d lose the thread of the previous one! With a couple of exceptions, I just stopped taking notes and listened. Guess I wouldn’t make a very good journalist.

Here is what I did manage to snag:

“Paperback books are making it too easy to read!” Mario Acevedo paraphrasing old tyme publishing. Mario was talking about how at the turn of the previous century, publishing was whining about the advent of paperback books! That—much like ebooks today—publishers were crying the sky was falling with the advent of paperbacks! I’d also read some early descriptions of publishing and the issues-of-the-times, and found that there was always something being touted as the “End of the World” for publishing…absolutely no different than today. People are people…and we love to whine and cry about how bad things are gonna be…then we buck up and move forward.

There was talk about the resurgence of short stories. Apparently between 2004 – 2010 nothing was being bought in terms of short stories…but now…since around 2012…some short stories are being bought. This might have come from Sandra Bond. I find this kind of thinking so damned parochial. That “no one is buying anything” mindset in publishing. No matter how stellar an editor, a publishing executive, they are all prone to prejudices and bad decisions. Readers will read anything that’s good! And to “just discover” that today’s readers “have a half-hour there, and hour there” as they go about their lives utterly astounds me….

“If something is holding you back…something is also pulling you forward.” Mario Acevedo. I found this to be perhaps the most profound statement all day! Not only does it fit in perfectly Newton’s Third Law of Motion, “For every action, there is an equal and opposite reaction,“…but it’s a terrific way to look at and deal with one’s publishing angst! Beautiful, Mario, simply beautiful!

Anne’s Keynote speech detailed anecdotes about her father and her time with him, as well as the benefits of reading fiction. Reading fiction improves brain connectivity and function. One of the benefits-of-fiction discoveries was that reading fiction makes one more sympathetic with others. That people who read fiction were better able to look at pictures of people’s eyes and better determine how the person behind those eyes was feeling. Fascinating. It does kinda disturb me that there are people out there who just will not read fiction. For more information about this research, click here. Anne also took questions from the audience.

While at MOA, I also met back up with several writer-friends I haven’t seen since the last MOA outing, Denver’s MileHiCon…or longer (one—Chris Goff—my God, it has to have been almost 30 years since we last saw each other). It was so great to see and talk to you all! And, yes, I am looking into this year’s RMFW Colorado Gold…which happened to have been the first-ever writer’s conference I’d ever attended some 30 years ago. I also have not attended it since that first time.

And a special thanks goes out to Darlene B., who is my wife’s client. It was so neat to finally meet her! She stopped by and began by saying that she’d known of my work for some 19 years. Thanks, Darlene, for stopping by! It was a pleasure to finally meet and talk with you!

And a tremendous Thank You! to all of the Pikes Peak Library District and all those who took part in putting this together! And thank you, Bryan Matthews, for again having me! I hope to be back for next year’s!