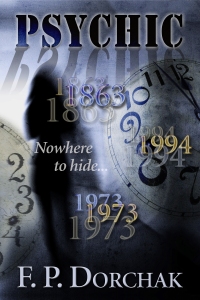 After some four years, I’ve finally made the ebook for Psychic!

I had to use a new formatter, Booknook.biz, which had been recommended by my former formatter, Pam Headrick. Pam had far too much going on and had to pass on the formatting, so she recommended a couple of options and I went with Kimberly Hitchens and Booknook.

But even getting this whole thing done had several false starts.  As I began to review the file, I found that…somehow…the entire file had become corrupted. All kinds of weird things had happened to it…mainly many line returns had gotten screwed up, but also—and randomly—sentences had gotten broken up, the oddest errors of which literally involved the ends of a couple of sentences being truncated off—then repositioned before the sentence of which they had been removed from! Sometime several lines above it!

There were other issues, but none of that now mattered. I had to now pull out my paperback copy and had to go line-by-line to compare my electronic file against the published copy.

Ugh. This was extremely tedious. Involved a couple of my own false starts.

But…long story, short, I managed to finally get that done, re-compared again after the first pass and I’d made the needed corrections, and finally completed the file reviews I needed to do. On the re-compare I did find two other issues I’d missed on the first pass. Of course. No matter how many times you go over things—even with other’s eyes—you’ll always find “new” mistakes.

So…several months later than expected, I finally have the completed Psychic ebook, while also finally getting my Sleepwalkers back into ebook format. Now all of my books are finally available electronically…and I can finally be freed to move on to totally new work, without having this hang over my head any longer! Both of these had been hanging over my head for many years, so this feels quite satisfying to have completed!

Psychic is now available at Amazon and Smashwords, and should also later populate to other retail outlets, for $4.99.