Some Books, Cats, and a Gift

Last weekend I held my first “dedicated” book signing in several years. By that I mean it was “all about me,” not a bunch of us at once, like at MileHiCon. It was weird.

Yeah, a little weird. I’d forgotten about that feeling. So I try to make it about the body of work, not the guy standing around with the stupid grin hoping you’ll come trade some cash for paper….

This was also the first book signing where I’d actively promoted it. Over a month out. All my other book signings had been more off-the-cuff things, maybe one prior one I’d put up a flyer somewhere the week prior…but I’d basically never done much to promote. But as I coordinated with Steffany, The Bookman’s manager, she kept wrestling me to the floor with Facebook. Telling me that she’s had authors do signings without being on Facebook and not selling a thing.

So, I had Lon Kirschner do up some really cool posters for me, and we’d put them up all over the West Si-iiide of town. Steffany had a mention or two on local radio. She also had a dedicated clientele…posters put up at all the local library branches.

I’d had an account years ago and killed it. I mean did the “kill shot” that involved them totally getting rid of everything about you like you never even existed, where you e-mailed or wrote a letter to them and they “erased” you.

So…I returned. And it is kinda fun that I’d reconnected with lots of my writer and non-writer friends I haven’t seen in the few years since. I’d quit a function a couple years ago where I’d normally see all these people, so it was nice reconnecting. So, Steffany’s prodding also had positive “unintended consequences”—thanks, Steffany!

Okay, so Facebook it is. I did the “Event” thing and annoyed my friends with “Come and See Me!” notices. I put up the posters. Handed out bookmarks. Mentioned it everywhere. Know what I found out?

Hi, I’m Running For Office. Do You Have A Baby I Could Hold?

The only thing that brought in people…was Facebook. The ONLY thing.

I can safely say that because of everyone that bought books, only three were people I’d not previously known before…one guy was at the store shopping before the signing officially started, had been in Vietnam, and we “talked military.” He gravitated toward Psychic, my remote viewing conspiracy theory novel. Bought it. The other two were a “friend of The Bookman’s” and her friend. Everyone else were people I knew (okay, one friend brought her sister, who I also did not knooow…but I did know of her…)! And they’d heard of it over

Now, that “friend of The Bookman’s” did say that she was going to go grab one of my posters from one of the storefront windows she’d seen it in, because it was such a cool poster and she wanted one! Thanks, Vanessa (and did you end up getting it?)!

But, all that aside…I was so moved by the support of my friends…and their excitement at coming down and being a part of this! I had so many questions thrown at me! One writer friend actually said she wished I’d had a presentation so she could ask more questions! How sweet, thanks, Ataska!

Afterwards (on Facebook) another joked about how she was observing all “my girlfriends”…and I’d joked, well, aren’t you one? She replied “Why, I certainly am!” But she brought up a point I hadn’t even realized at the time, but most of my friends who showed were female! There were only two dudes at the signing, three if you count Mark, who works at The Bookman. 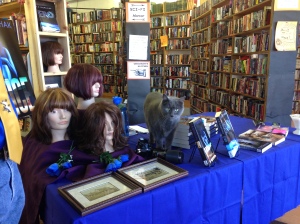 The Bookman has a couple of “resident cats” who roam the place like they own it. Well, they do. And I liked that. I love animals. One of them was quite curious, as you can see in this photo! S/he hung out on the table top there for a few minutes. Sniffing around, checking out “the heads.”

So, as moved as I was by the support of my friends, there was another incident that also really touched me. Apparently, one of my “Virtual Friends,” who interacts with me through blog posts and comments, hadn’t been able to make the signing…but had stopped by the previous day…and dropped off a gift for me. As far as I know we’ve never met at a conference or anything, but we have interacted off-and-on over several years through blog posts. She goes by Kattywampus Books. She’s quite witty and intelligent. I never know what she’s gonna say, or how, but it usually grabs and amuses me. Asks probing and thoughtful questions. Anyway, she had left me “a little something” that literally had me speechless. Nothing like this had ever happened to me before.

The Kattywampus Author Survival Kit™! No Author Should Be Without One!

She left me the coolest “Author Appearance Survival Kit.”

I mean, this took some serious thinking. Took a little out-of-pocket expense…but, more so, it was the thought that went into this. The gesture.

I was really touched by her gift.

That she thought enough of me to do something like that. To go out of her way, create it, then leave it for me. Wow. It still brings a huge smile to my face every time I think about it!

When I opened the case…read the letter…I was, um, verklempt.

I mean (until I finished reading the letter I didn’t know who had left this), who do I know who would do something like this?

Mark and  Steffany must surely have been watching my expressions.

Wow. As much horror and fear that’s instilled in the media about the world…it’s nice and amazing to find that there are people out there who do things like this.

Read Kattywampus’s post…most of that stuff in her post is in my kit. And she’s right! You do need this stuff! As it was, I had brought four pens with me, and with her nifty Fisher Space Pen (and refill!), I effectively had six. She even included a mini-First Aid kit (“Papercuts happen.”)!

But, dang it, now I have to do more book signings just to show this thing off!

So, thank you so much, Kattywampus! That was extremely thoughtful of you! Perhaps one day we shall meet…or if we already know each other and you’re just playing up the whole “mysterious” aspect…well played! I like a little mystery!

So, there it is…my first Only Me book signing in a handful of years…and it was a success. I’d sold the most books I’d ever sold in one sitting (12). Maybe not a lot by other’s standards, but for me, it was awesome! And the important thing for me was that I’d had fun. My accountant might feel otherwise (yes there is that nice little check being deposited), but we’re all happy, even The Bookman—who is now carrying my body of work (Psychic was sold out, but I have ordered more; I’m trying to get more Sleepwalkers, but AuthorHouse is not playing nice). So do feel free to stop on by! I love their bookstore, it’s very cozy and crammed with books. And a couple of cats.

And if you’re an author, and a little lucky…maybe someone will stop by and drop off a really cool Kattywampus Author Survival Kit™ for you!

Speculative and paranormal fiction author. Please check out my website: https://www.fpdorchak.com/. Thank you for stopping by!
View all posts by fpdorchak →
This entry was posted in Books, Fun, Leisure, To Be Human, Writing and tagged Author Signings, Author Survival Kit, Erotica, Hotline Psychics, Kattywampus Books, Lon Kirschner, Sleepwalkers, The Bookman, The Uninvited, Voice. Bookmark the permalink.

12 Responses to Some Books, Cats, and a Gift